Pongo Cheddar is professor of Food Technology at Reading University.

He is short of money because he made an unwise investment in Cheesey Wotsits just before the world economy took a massive dive in 2008. For some time his colleagues have noticed his suspicious behaviour. He has been spotted observing the dairy herd at odd hours. He has been seen sneaking into the University dairy in Redlands Rd late at night.

When the secret cheese formula disappeared at the same time as the Professor, Chief Inspector Mouse of Thames Valley Police was called in to investigate. However, the case completely baffled him. Cheesed off, the University called in crack detectives from Reading to help out.

A forensic lab was set up in the Museum of English Rural Life right next door to the dairy.

Detectives were issued with their ID cards which gave them access to the lab’s patent i-nigma machine. This could analyse clues at some speed. 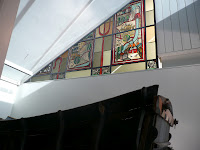 A piece of black cloth was found. i-nigma analysed it as coming from an academic gown. The Farm Manager had spotted one abandoned near one of the University’s farms. Detectives searched for it and found it hanging near an old Suffolk wagon. Looking up, they noticed this was a prime vantage point from which to view some types of animal which produced milk for cheese. They counted the types and then found another clue – bits of straw.

i-nigma identified it as straw from an experimental field near where the University kept its historic steam engine. Detectives rushed to the spot and noted the words inscribed in the ground next to the cows. They found evidence that the Professor had been there, his college scarf. They also found a third clue – a sort of white splat. They eagerly got i-nigma to analyse it. 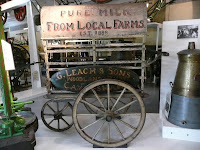 It was fresh milk from the University’s dairy herd. It looked as though someone had spilt it when stealing the cows’ milk. Detectives found a milk float parked outside the dairy. They  noticed it came from Caversham. The Professor lived in Caversham. Was there some link?

Detectives took a good look around the dairy. There were several bits of cheese-making equipment. They found the whey heater up against the wall beside an enormous milk churn. They noted it was made of wood and metal. It had been used recently.

Calling in a cheese-making expert from the Food Science Department, they realised the next stage would be to press the cheese so they went hunting for a cheese press.

Yes, they noted that the green cheese press had been used at the University! And the Professor’s mortar board was abandoned next to it. Had he been secretly making cheese from the formula? 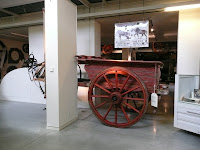 Nearby was another clue. i-nigma analysed it as horse hair. A horse and cart had been spotted leaving the dairy at great speed late at night. Was It being driven by the Professor?

Searching for the cart they found it parked but no one was to be seen. However, a green welly was left nearby, and they took the clue they found there back to i-nigma. i-nigma confirmed it was mud from the welly boot and seemed to come from a farm nearby.

Detectives visited the farm and discovered police photographer Justin Partyka had already taken a photo of the old pantry which contained a vital piece of evidence, a plastic supermarket carrier bag. Nearby they found a further clue, a fingerprint. i-nigma confirmed it matched the Professor’s fingerprint and also had pungent cheese molecules on it.

The evidence seemed to be getting stronger and stronger, as was the dreadful smell! In a small cupboard, their nose told them they had the final bit of evidence. A new form of Stinking Bishop cheese. The Professor had been in talks with supermarket giant, Tesco, hoping to make a fortune by selling the formula.

His colleagues in the Food Science Department were furious as they had all worked on the new formula and were hoping to share in the fame it would bring them.

Professor Pongo Cheddar was up in Reading Crown Court for formula theft and endangering public health by manufacturing a malodorous cheese.

Chief Inspector Mouse retired early, too embarrassed that Reading’s detectives had solved the Great Cheese Mystery where he had failed.

The Detectives were awarded certificates of appreciation by the grateful University. 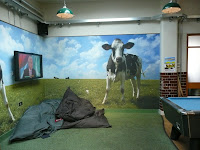 The not-so-alternate reality
The building which is now the Eat cafe next to the Museum of English Rural Life was part of the British Dairy Institute. This taught cheese-making, and some of their equipment later came to the Museum.  The University of Reading still teaches cheese-making and maintains a strong academic interest in Agriculture and Food Science. If you go to the cafe you can see milking stools and a life-size wall painting of a cow (up the steps inside the cafe).

In ‘Old Redlands’ published by the Redlands Local History Group in 1990, a local resident recollected that the University kept herds including Guernsey, Jersey and Alderney cows and a ‘source of cheap weekend nourishment [for local people] was the university farm dairy on the corner of Elmhurst Road and Upper Redlands road, where children from poor families would be sent to fetch a halfpenny jugful of skimmed milk on Saturdays for milk puddings.’


Berkshire isn’t traditionally thought of as a cheese making county, but there has been a resurgence in interest in cheeses and Barkham Blue (made near Wokingham) and Spenwood (named after Spencers Wood) are made just a few miles away.