We’ve found that some people can have difficulty making touchscreens work. There can also be problems with lining-up the camera  on a smartphone or iPad with a QRcode. A previous blog, http://imusenews.blogspot.co.uk/2012/02/initial-experiences-with-touch-screens.html, described these problems.

We have a bit more experience, from both visitors and volunteers/staff at our iMuse partner museum and from more elderly and partially-sighted (potential) users elsewhere. 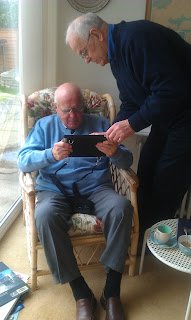 First, on the touchscreen, it seems some people just do not have whatever the right ‘chemistry’ or whatever is needed on their fingertips to get a screen to react. Here is a 92 year old, who can see well enough to touch an icon on an iPad 2, and who is proficient with similar manual tasks such as typing. Despite help, the iPad just did not react at all to his touch. Interestingly, an attempt on a subsequent visit, this time with the new iPad, presented no problems at all and touching, swiping and pinching were all fine.

A staff member at the museum described a similar touch problem with an iPhone, which would not react at all. However, trying our new iPad was fine. Now, they had just come from a shopping trip during which they’d tried out some hand creams. Pure speculation, but is there a connection? One of our volunteers (who wishes to remain anonymous due to this unsavoury habit) confesses to licking her fingers before using a screen that isn’t reacting (and sometimes feels this helps also on a laptop tablet-mouse). Is this real or the start of a new urban myth? What about the weather? Is a very dry day unhelpful?

A museum volunteer just could not get a ‘touch’ on the iPad to work but there could be a reaction to movement – the whole screen in an application shifting. This can be disturbing for people not used to it –  they can even think they have ‘broken’ something. We have had this ‘fear’ reaction also from someone in their 70s who is a long standing computer-user, but used to the more mechanical ‘feel’ and reaction of a keyboard and mouse-click. 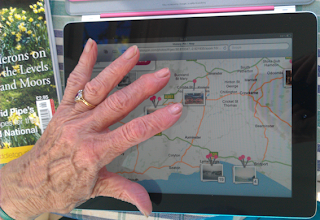 Earlier, we found another 92-year old felt reasonably comfortable with trying out Historypin (which involves touching a map) on an iPad 2, saying she ‘would enjoy doing this’, but again there could be unexpected movement as the user leaves their finger on the screen, or inadvertently touches it, for example while passing the iPad to a companion. For now, we are locking the screen in the trial ‘apps’ but this isn’t ideal as some of the usefulness of the iPad (e.g. pinching to increase the size of photos to see more detail of a museum object, or as an aid to those with failing sight) is lost.

The iPad can also be awkward, and rather heavy for someone with weak wrists to hold. Without any sort of extra case it can feel a bit hard and ‘slippery’. We also found during the Project Berkshire experience in the shopping mall that some people preferred to use the iPad mounted in a box to do the drawing activity, somehow maybe it felt more ‘secure’? For its use as a QRcode reader, mounted for example on our trolley for a museum visitor to wheel around (http://imusenews.blogspot.co.uk/2012/02/great-reading-cheese-mystery-part-4.html) we have been thinking of moving from the amateur-looking sticky tape and cardboard box to a custom-built wooden box [as befits a Rural Life museum].

This would however increase the weight which may not help more frail users when using it say at home. This is a consideration for our new project, using the iPad and music, where the iPad will be used in partially or totally ‘uncontrolled’ environments in a care home or in the user’s own home. Perhaps again, using it on an adjustable trolley/table rather than handheld might be the way forward? It would give the user one less thing to worry about. Have other projects had experience with this elsewhere?

Using the iPad in a box with QRcodes on movable labels has proved extremely reliable for all visitors to our mini trails. In fact, children enjoyed having to control sliding the label under the camera until the iPad ‘beeped’ and put them online. However, for a partially-sighted user who tried out the box, this lining-up proved a bit problematic, and we have not yet had any user with more difficulties with hand-control try it. Our idea at the moment is to use reasonably thick card for the labels, to give stiffness, and to provide some sort of raised guide rails to help line up the label as it is slid into the box. We’ll do some further testing with users and report back!