We’ve tried a very simple ‘game’ in which an object had an A4-sized label attached looking like this. The child is asked to find one of the labels in the museum, a volunteer scans the QR code with an iPad 2 and the child is asked to ‘touch’ whichever object they think they are looking at. The reasons for doing this, including the use of Widgit symbols for objects can be left till later. For now this is a note to remind us of the practical problems and what we’ve done since.


The ‘game’ was trialled with some under 5s (plus mothers) and also shown to some museum volunteers, a few other visitors and staff. Problems included: small fingers not ‘touching’ enough, ‘dry(?)’ fingers just not getting a response, elderly visitor with gloves on (did not feel could ask to remove), a vague ‘fear’ of touching the screen, response time not completely instant (child used to iPad apps).


There were problems in some areas of the museum with variable wi-fi (appearing sometimes on one moment, off the next). Lining up the iPad (which was hung round the neck) with the code caused some uncertainty on occasion (possibly the non-central positioning of the camera on the iPad causes problems in alignment that don’t occur with a smartphone). Shadows occasionally caused a problem. A4 sheets were hung with string from the objects. It was not always possible to get them so they didn’t move/swing round or so that they were at a good height, though some of these problems were due to their temporary, experimental unplanned nature. 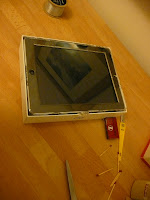 For our half-term activity (The Great Reading Cheese Mystery qv) we wanted a totally reliable way of children being able to get an iPad to ‘decode’ a clue which included a QR code. We therefore set up an iPad in a makeshift box, on a table with good wi-fi access. The children find a ‘clue’ and return to the ‘lab’ to have it analysed by the decoding ‘machine’. So far the i-nigma QR code reader app has been found reliable and this was loaded. The iPad was set not to turn off to minimise things that ‘could go wrong’ though the i-nigma app would need ‘resuming’ if not used for some time.


The child slid the clue under the iPad in a slit in the box. The iPad then revealed the analysed ‘clue’ (a simple wepage).


Apart from one very brief spell lasting a minute or so (in which i-nigma reported server problems) the decoding has been fast enough and totally reliable over two days. On the whole, children quickly learn how to position the code to get the app to ‘beep’ that it had read it. Some easily learned how to go to ‘home’ and restart i-nigma. Children seemed to enjoy using ‘the machine’. The ‘machine’ was movable so a child in a low wheelchair was able to use it and read the resulting clue. Children down to around 4 years old took part successfully. The machine was ‘manned’ by volunteers throughout.


Of course, we would like to have much more mobile access around the museum. The iPad has some proven advantages for people with various types of communication and related disability, using the inbuilt Accessibility features. However, its weight, the problems of reliably touching, wi-fi difficulties and problems of aligning with QR codes mounted in the ‘traditional’ museum position (e.g. on an existing label), not to mention security issues, have put us off  using it in this ‘conventional’ way.


One of our next steps will be to trial a lightweight but stable trolley which small groups can take round the museum, picking up QR codes on cards and ‘feeding’ them to the machine rather than the other way round. We will need to chose objects for their good wi-fi coverage and physical accessibility as well as for their interest/relevance to the trail or game.


We hope this way to enable visitors who find difficulty in typing (e.g. to put in an object’s stop number) or reliably using a touch screen to participate in a trail and to take part in choosing what they find out about.